I have long been in the habit of buying tools before I really ‘need’ them. Sometimes it has been because I found a really good deal on a unique or  high quality tool; more often though it has been because I have felt the urge to expand my skill set into some new and different realms. On occasion this has almost been a subconscious process, as my desire for certain tools has seemed to arrive ahead of any distinct awareness on my part of the urge to start working in different ways. The upshot of this is that certain purchases have remained untouched—sometimes for years—before I get around to being ‘ready’ for them. It was in this spirit that I bought an adze a long while back, before I had any idea of what I would eventually end up doing with it. I had sharpened it, and used it to debark a few logs before running them through a portable sawmill, but mostly it had just hung on the wall and looked cool (in my mind anyway). 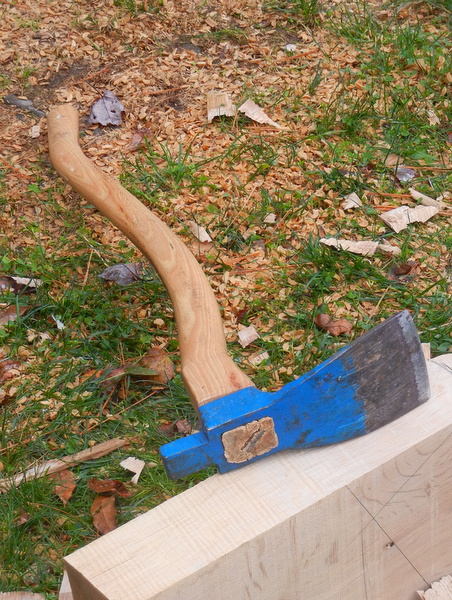 I finally got my chance last fall, when I started building a timber-framed front porch onto our house, and realized that I wasn’t sure how to go about shaping the large (3″x8″x6′) curved knee braces that I had designed as part of its structure. When working with curves in furnituremaking, I generally cut them freehand on the bandsaw before finishing them with convex-bottomed planes and/or spokeshaves, but working with timbers this large would necessitate a different approach, as my shop bandsaw isn’t near big enough for the job. I had briefly considered making a plywood template and using a router from each opposing face of each timber to cut out the shapes, which is another way a woodworker might approach cutting curves in a furnituremaking setting, but then remembered the adze—the dusty, lonely adze—hanging on the wall of the barn, and decided to give myself a crash course instead.

After the axe, the adze is likely one of the first wood-shaping tools developed once humans started working with metals, as opposed to stone, in toolmaking. With only slight variation, it seems to have developed independently in cultures all around the world, speaking to the fundamental ‘rightness’ of its design and functionality. In its most basic form, an adze is just 3 parts: the cutting head, an ergonomically curved handle, and a wood or steel wedge (or maybe sinew in a ‘primitive’ version) to hold the two together. Generally speaking, there are two different types of azde: the foot adze (such as the one seen here), with a long handle designed to be held by both hands while working a piece of wood down at ground level (between or under your feet), and the hand adze, which is much smaller, with a shorter handle designed to be held in one hand, for smaller, finer, more detailed work. Despite its simplicity, an adze is an amazingly versatile and refined tool, as well as a highly efficient one, as I was soon to discover.

Since I needed to make four identical braces, I did end up making a full-scale plywood template, which in addition to establishing the sweep of the curves to be cut, would also help me in laying out the tenons at the ends of each brace. Once that was done, and the profile was penciled onto both faces of each 3×8 oak timber, I used a skilsaw to cut out as much of the waste as possible in advance, though the entire process could have been done with just the adze, and maybe a little more time. Here’s a brace just before I started with the adze (note the layout lines in pencil):

From there, I took a deep breath, straddled the workpiece, and started chopping (adze-ing?) away, working in from each end in order to cut with the grain. With a heavy timber such as this white oak, it’s weight alone (along with the friction between it and the grassy ground) was enough to keep it stable and in position as I began to swing the tool. I quickly realized that I would need to experiment with my hand and body positioning, as establishing the correct angle of attack for the curved blade to make contact with each swing is infinitely variable, depending on whether your aim is to quickly remove lots of wood, or to finely finesse your way right down to the finished surface. Excessively shallow cuts will glance off without slicing into the wood (watch your shins!), while cutting too steeply will stop the blade entirely without removing any material. It is this very range of angles that makes for the tool’s versatility though, and in a matter of minutes I was already feeling daring enough to cut to within maybe 1/8″ of my layout lines: 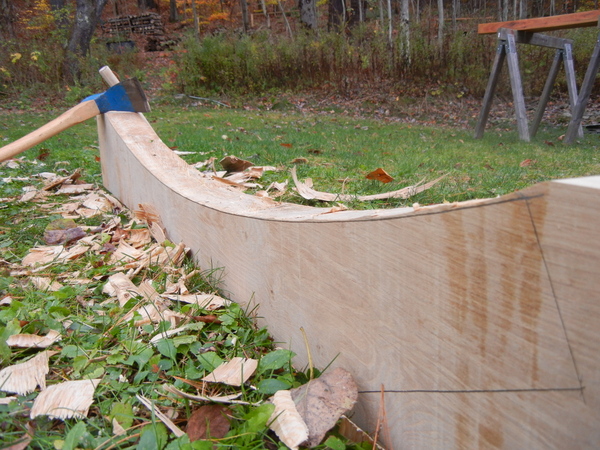 Taking the first brace down to this point took me maybe 20 minutes. The next three went faster still. It was so much fun I was sorry to be done. Making chips like this is way better than making lots of  airborne sawdust (like my other proposed methods would have). Excepting my chops, it was also quiet. I could periodically stop and rest and just enjoy the silence. I imagined what a woodpecker feels like working away on a tree in an otherwise still forest setting. The best part, though, was that using the adze connected me with the wood in a very unique way, as the ‘feedback’ received from each stroke guided the next one. Whereas the very nature of a ‘power’ tool—the use of linear brute force to do something to something else—generally alienates the worker from the material being worked upon, the adze is an example of a tool that by contrast requires a full and nuanced awareness and moment to moment connection between the worker, the tool, and the wood. It’s like a dance, rather than running a machine. That’s what makes it so much fun, and it’s also what makes it so effective. The luddite in me loves that.

Here’s a pair of finished braces (with a coat of linseed oil):

And here’s the finished product:

2 Comments on “the adze”