In the early years of owning my woodland, when out in the woods, I had a tendency to look at each of my trees in isolation—without the context of their immediate surroundings. “Here’s a Yellow birch, here’s a Sassafras, here’s a Red Maple”, etc….I truly couldn’t see the forest for the trees, as they say (or maybe more accurately, I couldn’t see the trees for the tree). So, when selecting a tree to harvest, I focused on the characteristics of that tree alone, which wasn’t wrong, per se, but was somewhat random (I certainly felt like there was no consistent method to my madness at the time), and really didn’t allow me to use my time in the forest very effectively. This all changed after a visit from a state forester, who came to assess my woodlot, and to help me in developing a long-term management plan.

As we walked and talked, we came upon some trees that I had previously selected and marked for removal. When he asked me how I had come to the decision in each case, I quickly realized (as did he, which soon became painfully obvious to me) that I didn’t really have any solid or sound answers. As we continued on, he began to point out groupings of trees, and discussed how he would go about selecting those to cut, those to encourage, and why. None of it was in the proverbial realm of rocket science, but almost immediately gave me an entirely new lens with which to view my forest.

What he encouraged me to see that day that so transformed my approach were a few simple ideas: 1) that the most important tree is not the one you plan to harvest, but the one you leave behind—that the focus of your efforts in the woods should always be with an eye toward future productivity, rather than merely on present value; 2) that (as discussed in a recent post) all the real action with regard to tree growth rate and competition between trees is happening in the crowns, so tree selection should be made with the objective of freeing the crowns of superior trees from shading; and 3) wherever possible, any cutting done should achieve multiple objectives at once— that improvement thinning (or harvest for any reason) should be targeted only toward specific groupings of competing trees, where it will achieve the maximum benefit for the residual stand—and therefore that random cutting of non-competing trees, even if their harvest meets some other objective, is at best counterproductive in an overstocked timber stand. Each of these ideas run counter to the common practice of harvesting only the biggest and best trees, without regard to the fate (or the future) of those that remain. By cutting only the best trees, too many landowners are killing the goose that could have laid them a lifetime of golden eggs, as they are either willfully—or unwittingly—sacrificing a future of sustained harvest and income for the sake of immediate profit.

The method he was describing that day, and that I have continued to use since with great success, is known as crop tree management, and was developed specifically for amateur woodlot owners, like me—and maybe for you, too. Click here for a link to the Forest Service publication Crop Tree Management in Eastern Hardwoods. A key benefit of the crop tree paradigm is that it is non-technical by design, so is readily understood by your average landowner, and can be applied at whatever scale desired, from focusing on a few individual trees on a small property, to improvement of woodlands of 100 acres or more. For woodlots that were neglected or mismanaged in the past, focusing on crop trees allows for the corrective work to be undertaken at whatever pace best suits one’s needs, without feeling obliged to engage in drastic stand-wide measures that may require more time, energy, or financial resources than you as the landowner are able (or willing) to devote.

Here’s an example: The photo below shows a pair of trees growing in close proximity. The tree on the left is a Red Maple; on the right is a Red Oak. For a number of reasons, the oak is of more value to me as a crop tree, so I have marked the maple to be removed. 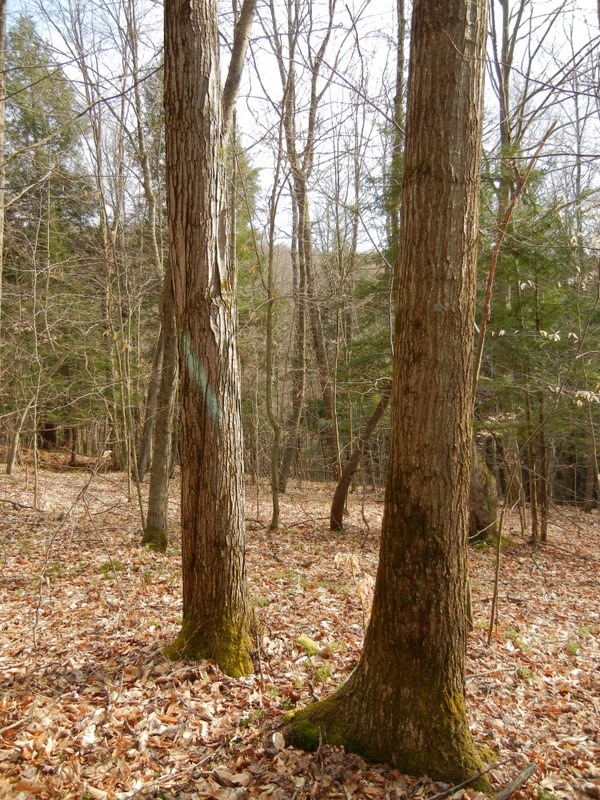 Here’s a view of their crowns, clearly in competition, thus hindering the ability of each to photosynthesize. With the maple removed, the oak crown will be able to expand into the now empty growing space, and will result in rapid diameter gain for the oak stem. 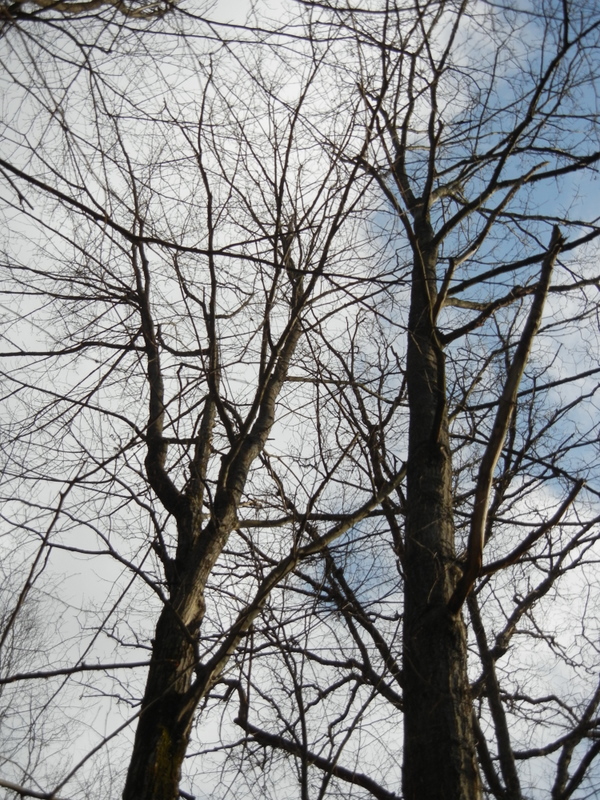