In my last post, I talked about grafting apple trees as a way to grow more or different varieties on an existing tree. One thing I didn’t fully address in that discussion is why pretty much all fruit trees you might purchase are topworked in some way by the nursery—most often the desired variety is budded onto an appropriate rootstock. Beyond the issue of using the character of the rootstock to determine the ultimate size of the tree, it would be reasonable to ask why more fruit trees are not simply grown from seed. The answer to this lies in the fact that for most common fruits, a seedling tree will most often bear little resemblance to its two parents, as there is so much genetic variability in say, apples, for example, that recessive traits often resurface. So in crossing two big sweet, red apples, you may well end up with a runty crab-like fruit with little or poor flavor. In addition to being a gamble, growing from seed also requires extra patience, as the seedling will obviously take much longer to grow to bearing age than would a grafted or budded tree.  Occasionally, a seedling tree is found to have exceptional fruit, with unique shape, color, flavor, resistance to pests and/or disease, or long-term keeping qualities, but this is a relative rarity. I’m not saying you shouldn’t try, as you may get lucky, or famous, or at least get to name your own variety, but don’t bet the farm on it. There is one significant exception to this rule, however—the peach.

Peaches are known for being ‘true to type’ when grown from seed much more often than our other major temperate-zone fruits. This also holds true for nectarines, which are really just a naked (fuzzless) peach—they are each classified botanically as Prunus persica.  So if you want to grow some peach trees (believe me you do, whether you know it or not), and you’re not in a terrible hurry, save the pit from the next delicious peach you eat—a locally grown peach if possible, as it will most likely be adapted to your climate. In my case, I saved about two dozen pits from a young Sunhaven tree in my orchard which bore a crop for the first time last year. They were truly the most delicious peaches I have ever eaten. Long before I ever had my own orchard I had read about how there is nothing like eating a ripe, juicy peach right off the tree, blah blah blah,whatever….Well, all these years later I’m here to tell you folks…………………It’s true. I would stand beside this tree late last August picking and eating  a half-dozen or more at a time, every day until they were gone. No comparison to a supermarket peach whatsoever.

Like many other seeds, your peach seed will need to be cold stratified—basically it will need to experience a real (or simulated) winter before it will break dormancy and be able to germinate. You could bury them in a pot outside for the winter, or do as I did with mine and put it in a ziploc bag in the back of your refrigerator with a few drops of water for the winter. When spring rolls around, you then need to plant the seeds, but your success rate will be much higher (and things will move along much quicker) if you crack open the hard outer seed coat first, which can be challenging without the right tools. I tried a hand-held nutcracker, then a large pair of pliers, but peach pits are hard, and I had to apply so much pressure that my precious seeds went flying, as did the ‘shrapnel’ from the broken pits. I also mashed one of my fingers between the handles of the pliers, which didn’t make me very happy. So here’s what I came up with: 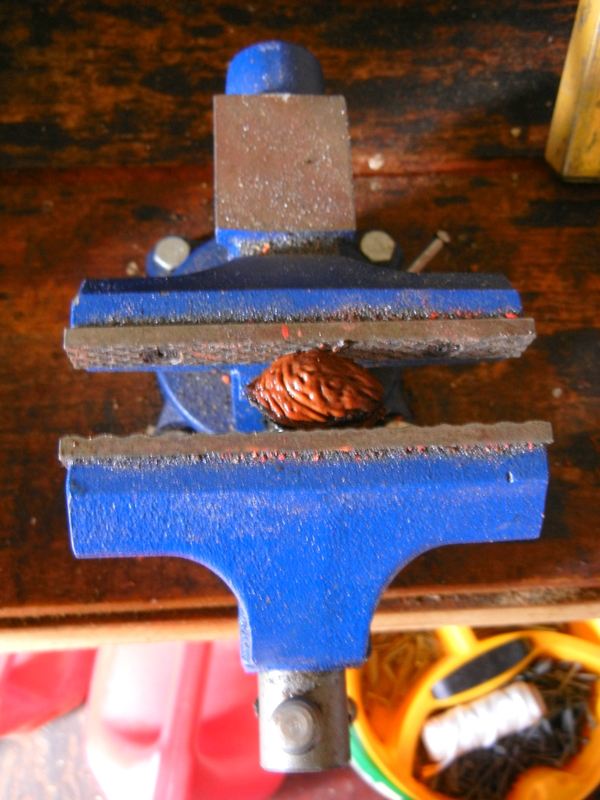 Using a vise allowed me to put great pressure on the pit, but in a very controlled, gradual way. I could actually hold the pit with one hand while cranking the vise with the other. This is the result: 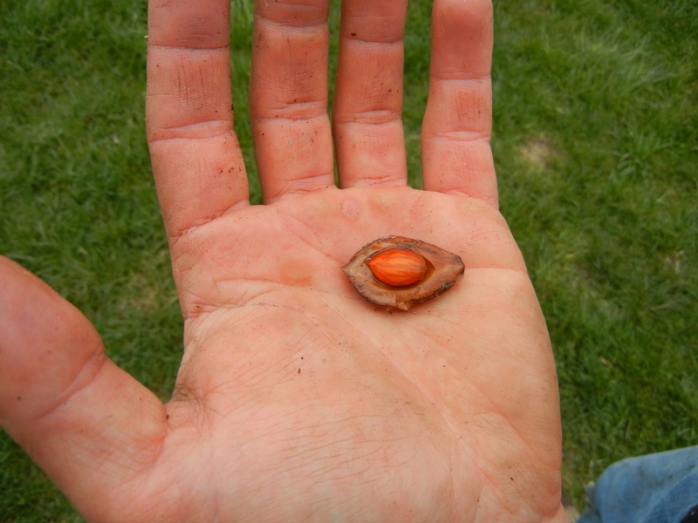 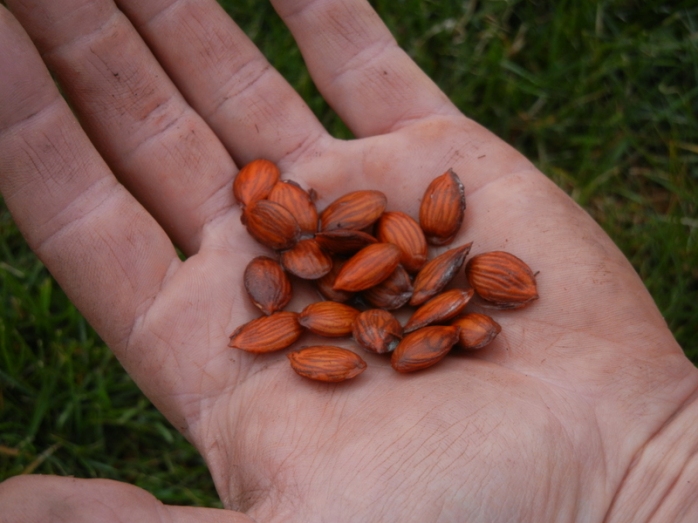 One thing you can see right away is the resemblance of a peach seed to an almond. They are in fact very closely related botanically, each belonging to the Prunus genus (almonds are P. amygdalus). So all these seeds are now planted in pots, and should be coming to life any time now. Near all peach trees are self-fertile, so you can get by with just one and still get a crop, but growing them this way is so easy (and so cheap), why not start your own peach orchard?